Dr Janet Soskice on The Sisters of Sinai – How two lady adventurers discovered the lost Gospels. 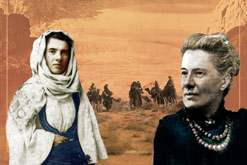 Dr Janet Soskice on The Sisters of Sinai – How two lady adventurers discovered the lost Gospels.

The year is 1893, and whilst Victorian fervour over the translation of the King James Bible was quietening, scientific-rationale was still casting a shadow over the text. So when news broke on 13th April that an ancient manuscript of the Four Gospels had been discovered at Mount Sinai in Egypt it was received with great public interest, and not a little trepidation. More astonishing than the palimpsest’s existence however, was the circumstance of its discovery. Rather that the archetypal scholastic-explorer, the manuscript was discovered by two sisters – Mrs Lewis and Mrs Gibson. Widowed twins, fluent in Arabic and Greek, described by acquaintances as ‘learned’ yet unremarkable; based on travel diaries, letters and their own academic publications – theirs is a truly remarkable story.